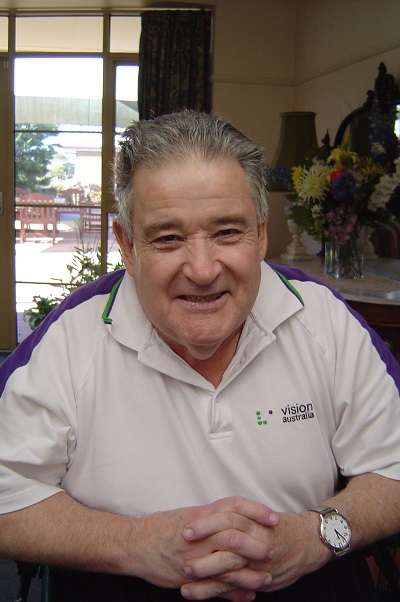 Born forty-five minutes after his twin sister Anne and weighing only 900 grams, Gerard was not expected to live. Sister Anne Byrne RSJ, who baptised Gerard on the day of his birth, later said that he had ‘died’ several times before she was sure that he would live.

A legacy of Gerard’s difficult birth was that the administration of oxygen damaged his optic nerve, leaving him with a serious visual impairment including ‘tunnel vision’. He had limited sight and was legally blind.

After surviving polio at the age of five in 1945, Gerard was educated at St Lucy’s School, Homebush and later at St Edmund’s School for Students with Vision Impairment at Wahroonga. He attributed his vocation to religious life to his experience as an 11-year-old at St Edmund’s, when he was appointed assistant-sacristan and realised that he had a special attraction to the Eucharist.

In 1956, on completion of his secondary education to intermediate level, Gerard joined the workforce as a trainee purchaser at Farmers department store in Sydney. It was during this period that he began to regularly visit the Church of the Blessed Sacrament at Haymarket in central Sydney (now St Peter Julian’s Church).

Although Gerard’s first choice was to become a priest, he understood that his vision and limited education precluded that choice in 1957. McNevin told Gerard he had ‘ample sight for what we would want’ – a vocation as a lay brother in the Blessed Sacrament Congregation.

Gerard liked the semi-contemplative spirituality of the Congregation and the service of adoration that characterised the Congregation’s life at that time. He felt that brothers and priests were more ‘equal’ in the Congregation than in some other religious orders he might have chosen.

Both Gerard and his father felt that, at only 17 years of age, Gerard was a little young and immature to make the decision to join. But McNevin warned that ‘another novice master’ might not be as accepting of Gerard’s visual impairment. This had the effect of putting pressure on Gerard to join sooner rather than later.

Within weeks of meeting McNevin, Gerard became an aspirant for religious life in the Blessed Sacrament Congregation. He moved to Bowral, initially as a postulant before formally entering the novitiate on 27 February 1958, when he was clothed in the habit of the Congregation and took the religious name of Br Majella.

Gerard’s parents were supportive of his vocation, but they did not want him to feel obliged to stay if he ever became unhappy. Soon after Gerard’s arrival at Bowral, his father gave him the key to the front door of the family home as a reminder that he could always come back.

But Gerard stayed. And he remained happy in his vocation despite the discipline of the novitiate under McNevin, the loneliness he sometimes suffered at Bowral, and the isolation he often experienced as a person living with partial sight.

He relished the relocation of the novitiate from what he called the ‘cows and frogs’ of Bowral to the ‘noise and traffic’ of Toowoomba, Queensland in 1958. At Toowoomba, on 27 February 1960, Gerard made his first profession of religious vows as a member of the Blessed Sacrament Congregation.

Immediately after his profession, he remained at Toowoomba as a brother serving the novitiate community. His earliest and most regular ‘employment’ was as a cook. Gerard loved being a cook, he said, because it was ‘rewarding’. And, as many a cook has found, a widening waistline was one of those rewards.

In 1962, he was posted to the Congregation’s Seminary of Christ the King at Lower Plenty on the outskirts of Melbourne. In a service at the seminary on 27 February 1963, Gerard made his perpetual profession as a member of the Blessed Sacrament Congregation.

He continued to work in the seminary until 1964, when he returned to his home town of Sydney to join the Haymarket community at St Peter Julian’s Church. For the next fourteen years, Gerard remained at Haymarket, serving in various capacities as porter, sacristan, guestmaster, refectorian, lector, acolyte, and cook. A man of many talents, he also assisted as master of ceremonies on occasions in the church.

In the mid 1960s, Gerard relinquished his religious name of Br Majella in favour of his own name. He had originally wanted to be ‘Br Gerard’ but was not allowed to take ‘Gerard’ at the time of his entry because the name had already been taken by another brother.

When Fr Joe Geran became provincial leader in 1978, he asked Gerard if he was feeling ‘generous’, to which Gerard naturally replied ‘Yes’. ‘Good’, said Geran. ‘I want you to go to Melbourne’. And so, Gerard packed his belongings and moved to the religious community at St Francis’ Church, where he would remain until his retirement.

At St Francis’ over the next two or three decades, Gerard became a familiar figure, serving at the altar and often working as the house porter. He enjoyed helping others and liked being the first ‘port of call’ for all those seeking help, referral and advice.

For people with vision impairment and other disabilities who sought assistance at St Francis’ Church, Gerard made himself available as a special counsellor on regular duty. Several days each week, he visited St Paul’s School for the Blind for welfare work as a counsellor and catechist. He also ran religious retreats for the students at different times.

From the early 1980s, Gerard was a director of the Villa Maria Society for the Blind. In a range of roles at Villa Maria, he served as a member of the Educational Services Committee, chaired the Camberwell House Committee, and was an advisor to the Board on welfare issues and activities.

At St Francis’, Gerard played the organ to accompany the Morning and Evening Prayer of the Church. His musical gifts were first developed as a schoolboy at St Edmund’s, where his music teacher recalled that his ‘poor sight-reading was compensated for by an almost perfect ear and tone’.

With a technical bent of mind, Gerard enjoyed a lifelong interest in ‘gadgets’ of multiple kinds. One of his house responsibilities was to manage the telephone system at St Francis’, which was a mystery to many others with perfect sight.

The silver jubilee of Gerard’s religious profession was marked by a concelebrated Mass at St Francis’ Church on 28 July 1985.

Many will remember Gerard becoming a minor celebrity with the screening of the SBS television series Once Were Monks (2000), which documented the lives of the religious community at St Francis’ Church during a time of change in the late 1990s. Unfortunately, the shock of stardom proved too much for his beloved budgerigar co-star ‘Francis’, who went to meet his maker during the filming and had to be replaced by a stunt double.

When asked about the difference between brothers and priests, Gerard liked to say ‘one works, the other doesn’t.’ Throughout his life, he was blessed with a wonderful sense of humour. It lifted his spirits and endeared him to others. He loved a joke and could always laugh at himself. He had a rare gift for making people happy.

He would often entertain his confreres with magic shows. There was magic in Gerard, and a part of that magic was that he saw more than he could see. Underneath his cheery smile, behind the long white beard of the roly-poly Father Christmas who greeted the children at the Pastoral Centre each December, was a wise and thoughtful man who often pondered the religious faith to which he had given his life. He came to appreciate that God was bigger than any religion.

From the mid 1980s, Gerard sought to discover God in ‘a different way’. With a keen interest in the Old Testament, especially the Psalms, he set out to investigate the Jewish faith, for which he had always had great empathy. During this journey, Gerard spiritually benefited from the many Jewish discussions, lectures and services he attended. Although warmly welcomed by his Jewish friends, he was warned that he would not find Jesus. To which, he replied, ‘I haven’t lost him’.

He was strongly influenced by the teaching and close friendship of the American Rabbi Elihu Schagrin (1918-2004), who had visited Melbourne in 1989-90 and maintained a regular correspondence with Gerard after his return to the United States.

Gerard’s sporting career was another aspect of his long and rich life. For about fifteen years, he played Blind Cricket at Kooyong, which involved about ten matches every season. Known mainly as a batsman, he had a reputation as a ‘blocker’.

When severe joint problems began to limit Gerard’s mobility, he was obliged to retire from cricket. He adopted a high walking frame, complete with wheels, bell, and a bicycle hooter which he loved to use (or misuse) in the silence of the monastery passageways.

The golden jubilee of Gerard’s religious profession was celebrated at a community Eucharist at St Francis’ in February 2010. By that time, diminished mobility and other health problems had prompted his relocation to aged care at Rice Village in Geelong.

Gerard’s brother Patrick died in 2007 and his twin sister Anne died in 2014. A few years ago, Gerard moved from Rice Village to Mercy Place, Parkville where he was able to be in closer contact with his religious brothers in Melbourne.

Shalom, Gerard. May you rest in peace.